Kazakhstan is rich in different mineral resources, oil, gas and coal being the most important ones for the economy of the country. Therefore, since independence, the government of Kazakhstan mainly focused on developing the fossil fuel industry rather than alternative energy resources. However, due to its geographic location, the country has a great potential to develop its renewable energy resources as well. Nevertheless, currently, 75% of energy is being produced by coal-fired power plants, which largely contributes to air pollution causing harm to human health and well-being, as well as impacting climate and the environment. On top of that, most of the coal-fired power plants, operational since the Soviet Union era, are outdated, with a low level of the efficiency of energy generation.

Only recently, the country started actively developing policies aimed at the development of renewable energy resources. Thus, recent financial crisis due to volatile oil prices, currently being exacerbated by the global pandemic. Hence, the need to reduce reliance on fossil fuels, as well as environmental impact has led the heads of the countries worldwide, including the government of Kazakhstan, to pay closer attention to the development of renewable energy resources. Thus, today, renewable energy development is an important and essential topic that covers state politics, economy, innovation and science.

As of May 2020, the country had 97 renewable energy projects with a total capacity of 1,260 MW, with 19 more projects being approved by the government, nine of which were to be launched by December 2020 (Satubaldina, 2020). Currently, solar power plants produce 697 MW, which is half of the renewable energy production in Kazakhstan.

Solar power has a great potential as a renewable energy resource due to sparsely populated large areas and the climatic conditions, especially in southern Kazakhstan with an annual sunshine of 2200 to 3000 hours. During the summer months (June – August), due to its geographical location, the southern part of Kazakhstan receives direct solar radiation for the most of the daylight hours which constitute 83 – 96% of the maximum possible value. While the northern part of the country receives approximately 2,000 hours of sunshine, the southern cities such as Kyzylorda and Shymkent receive 2,936 and 2,892 hours of sunshine annually, which is enough to meet the electricity demand of southern Kazakhstan. For comparison, the average number of sunshine hours in Vietnam is 2,200, in China – 2,500, in Germany, United Kingdom, Norway and Japan – less than 1,000 annually (Tsyba and Kuzmin, 2014). 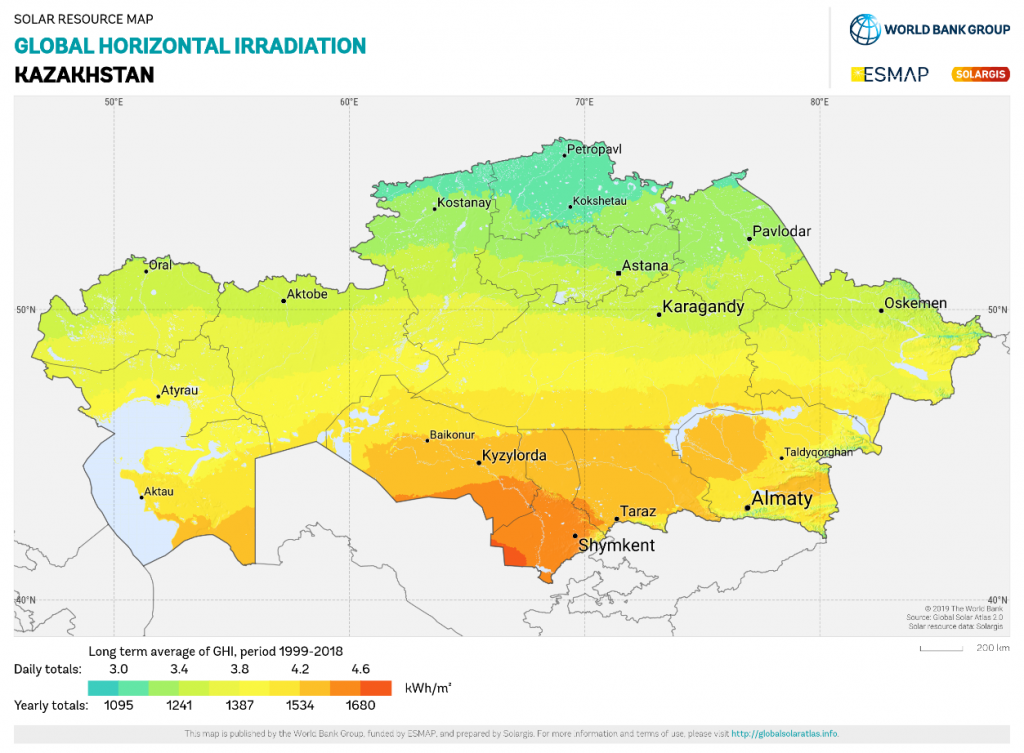 The largest Central Asian country, Kazakhstan, has a great potential of solar energy. The amount of solar radiation is 1300-1800 kWh per square meter per year (CaRNet, n.d.) (Figure 1). Annual potential of solar energy is estimated to reach 2.5 billion kWh. Table 1 shows data on monthly and annual values of the solar radiation for three areas: Fort-Shevchenko (on the coast of the Caspian Sea), the Aral Sea basin (near the Aral Sea coast) and Almaty (southeast Kazakhstan).

According to the International Energy Agency (IEA), within the period of 40 years, solar energy has a potential to meet about 20-25% of the energy demand of the country. Moreover, this share of required electricity can reduce carbon dioxide emissions by 6 billion tons annually (Antonov, 2014). Nevertheless, sadly, despite the immense solar capacity currently, the amount of energy obtained via solar radiation is negligible, as the country continues to rely on the use of fossil fuels as a source of energy.

In general, issues related to electricity and heat generation and consumption are regulated under the Law on Electricity (2004). Some other issues on renewables are also regulated by policies such as the Land Code (2003), the Water Code (2003), the Law on Natural Monopolies (1998) and others (Bytyrbekov, n.d.). Nevertheless, the government of the country has developed separate policies aimed at managing the issues related to renewable energy development. Following the global trend, according to the Concept of Transition of the Republic of Kazakhstan to the “green economy”, the government of the country set an ambitious goal of reaching 3% renewable energy share in the overall energy balance of the country by 2020, 10% by 2030 and 50% by 2050 (Bytyrbekov, n.d.). With the support of the government and other international agencies, Kazakhstan is taking steps towards the development of the renewable energy sector. It can be noticed that the programs and policies on renewable energy support the short and long-term potential of renewable energy resources in Kazakhstan. However, despite the numerous legislations, unfortunately, the county has a long way to go to catch up with the developed nations.

informburo.kz (2019). The solar power plant was put into operation in the Almaty region. Retrieved from https://informburo.kz/novosti/solnechnuyu-elektrostanciyu-vveli-v-ekspluataciyu-v-almatinskoy-oblasti.html. Accessed on 06.01.2021.

Satubaldina, A. (2020). Nine Renewable Energy Projects to Be Launched in Kazakhstan By December. Retrieved from https://astanatimes.com/2020/05/nine-renewable-energy-projects-to-be-launched-in-kazakhstan-by-december/. Accessed on 23.12.2020.

Sim, O. (2015). New industrialization as the driver of economic growth in Kazakhstan in the conditions of globalization. G-global.

Tsyba, Yu., & Kuzmin, Yu. (2017). The current state of the electric power industry: Electric power industry in Kazakhstan and the prospects for the use of renewable energy sources. Almaty University of Power Engineering and Telecommunications, UDC 621.548.4: 621.311.24.”