Impact of the Pandemic on democracy in the Central Asia Region

The pandemic has disrupted the usual course of life in many ways – some had to adapt to the new online lifestyle, others lost their jobs, some – even their lives. Most of the countries worldwide finished the year in a much worse socio-economic state than they had begun with it. One more area of human life that was severely affected by the pandemic on a global scale is the system of governance. According to the Economist Intelligence Unit [Economist Intelligence Unit, 2021], the year 2020 was the worst for democracy worldwide since 2006, the start of the Democracy Index. A lot of countries worsened their ratings due to the restrictions imposed on individual freedoms and civil liberties in response to the pandemic. Another significant trend taking place is the global shift from the West to the East in terms of democracy. While Western Europe has lost two “full democracies” – France and Portugal, Asia has gained three “full democracies” – Japan, South Korea, and Taiwan.

Regarding the nature of the Democracy Index, it is based on five categories: electoral process and pluralism, the functioning of government, political participation, political culture, and civil liberties [Economist Intelligence Unit, 2021]. Based on its scores (out of 10 in each category) on a range of indicators within these categories, each country is then classified as one of four types of regime: “full democracy”, “flawed democracy”, “hybrid regime” or “authoritarian regime”. The index covers 165 countries and two territories, and it has already published 13 issues since 2006. 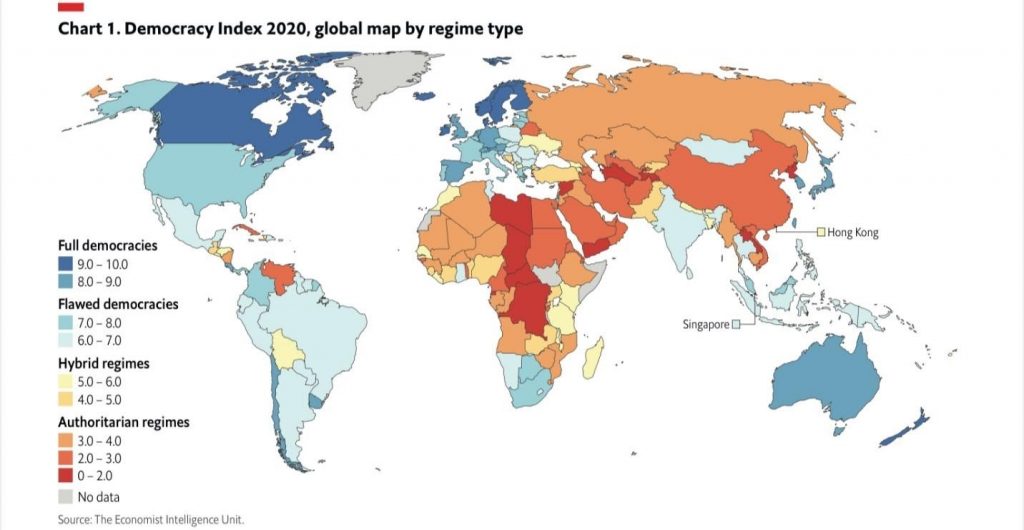 Counterintuitively, the year 2020 wasn’t as bad for the Central Asian countries in terms of democracy. Kazakhstan and Uzbekistan demonstrated a slight growth, making both of their scores the highest since 2014. It is interesting to note that both Kazakhstan and Uzbekistan had unprecedented spikes in their scores in 2014 (3.17 and 2.45, respectively), Kazakhstan experienced that due to the growth in political participation, while Uzbekistan increased its score in the areas of government functioning and political culture.

For Kazakhstan the recent growth of 2020 (from 2.94 to 3.14) is explained in terms of political participation and government functioning, meaning that both the society and the government contributed to the results. However, at the same time, the researchers noticed a drop in political culture. Currently, the electoral process and pluralism category are the weakest link of the local democracy, any improvements in these spheres would have a huge impact on the country’s score and the state of democracy. The government of the republic announced and authorized relevant reforms in the first half of 2020 [Vaal, 2020]. However, according to local and foreign experts, these reforms, aimed at improving the situation with political parties, have not yet led to noticeable changes in the work of parliament [Vayskopf, 2021]. However, the results of the recent parliamentary elections, which were attended by representatives of three parties out of the five that participated in these elections, have not yet had time to show themselves. In terms of local democracy’s strengths, political participation has remained the main one for years, therefore making the Kazakhstani society the main contributor towards democratization. Overall, it can be said that the current trend within the index is positive for Kazakhstan, however, the republic is still yet to retrieve its former results from the 2000s when the country was able to score as high as 3.62, the highest result Kazakhstan has ever achieved within the index. In a comparison of 2006 results with 2020 ones, it can be observed that the government functioning (2.14 to 3.21, respectively) and political participation (3.33 to 5) have improved with time, however other categories have deteriorated, especially the already mentioned electoral process and pluralism (2.67 to 0.5). In any case, it is important to note that Kazakhstan’s score is still almost two times lower than the world average and there is a substantial way to go.

Uzbekistan’s growth in 2020 (from 2.01 to 2.12) is based solely on political participation growth with all other factors remaining constant. This once again highlights the role of society in the promotion of democracy. Regarding the wider trends, it can be seen that Uzbekistan in contrast to some of its neighbors is enjoying higher levels of democracy since 2014 (2.06 on average), compared to the previous period (1.75 on average). Uzbekistan experiences the same difficulties as Kazakhstan with the electoral process and pluralism being its weakest category with a score of only 0.08, at the same time political culture remains the highest scoring part of Uzbek democracy with a score of 5. International experts assess the reforms in Uzbekistan as mainly economic, almost not affecting the political aspects of citizens’ lives [Schmitz, 2020].

At the same time, the scores for Tajikistan and Turkmenistan remained constant, continuing the long-lasting trend. Since 2006 Turkmenistan scored only either 1.72 or 1.83, demonstrating the static character of the regime and the society. For the four recent years, the score was set at 1.72. The weakest part of Turkmenistan’s fragile democracy is the electoral process and pluralism, which has a score of zero, Turkmenistan is one of only 24 countries in the world with such a score for the category. It is interesting to note that counterintuitively at the same time Turkmenistan’s score for the political culture is quite high for this kind of regime – 5.

Tajikistan’s score is both higher (1.94) and more dynamic than that of Turkmenistan. However, the republic consistently scored above 2 and as high as 2.51 before 2015. Since then the country has been drifting a little below the score of 2. According to the index, this decline is explained by the fall in three categories: electoral process and pluralism (from 1.83 to 0), political culture (from 6.25 to 4.38), and civil liberties (from 1.47 to 0.88). Simultaneously, significant growth in government functioning score has been registered (from 0.79 to 2.21). Thus, it can be observed that while the government of Tajikistan has shown itself as more professional in recent years, the rights and freedoms of people have been limited within the same period.

Kyrgyzstan was the only country in the region that fell significantly to its worst result (4.21) since 2008 (4.05), this seems to be a part of a trend for the country that started in 2017. The republic has experienced a significant plunge in all categories but the functioning of government, the most notable one happening in the electoral process and pluralism. This falls perfectly in line with recent events in the country culminating in the government overthrow due to supposed election fraud [BBC, 2020]. Still, the Kyrgyz Republic remains the highest scoring country in the Central Asian region and the only “hybrid regime” surrounded by “authoritarian” neighbors, with Kazakhstan as the closest pursuer. Uniquely for the Central Asian region, the government functioning is the weakest part of Kyrgyz democracy, while political participation is its strongest foundation.

According to some experts, the coronavirus pandemic did not generate, but only highlighted and accelerated many of those social processes that existed or inevitably had to appear in society regardless of this disaster [Shulman, 2020]. Obviously, an extreme situation can have not only destructive effects on people and societies, but, on the contrary, induce them to self-determination, contribute to an increase in the meaningfulness of life and social maturity.

Economist Intelligence Unit (2021). Democracy Index 2020 In sickness and in health? Retrieved from https://www.eiu.com/public/topical_report.aspx?campaignid=democracy2020 Accessed on 15.02.2021.

Shulman. Ekaterina (2020). Socio-economic consequences of the global quarantine. Retrieved from https://www.ranepa.ru/ab/lektsiya-ekateriny-shulman-sotsialno-ekonomicheskie-posledstviya-vsemirnogo-karantina. Accessed on 21.02.2021.

Vaal, Tamara (2020). Parliament of Kazakhstan fixes the decrease in the number of members for the registration of political parties. Retrieved from https://vlast.kz/novosti/39702-parlament-kazahstana-zakrepil-snizenie-kolicestva-clenov-dla-registracii-politiceskih-partij.html. Accessed on 18.02.2021.

Vayskopf, Anatoly (2021). Elections to the Parliament of Kazakhstan: rebranding, budgets, intrigues. Retrieved from https://www.dw.com/ru/vybory-v-parlament-kazahstana-rebrending-bjudzhety-intrigi/a-56172222. Accessed on 27.02.2021. 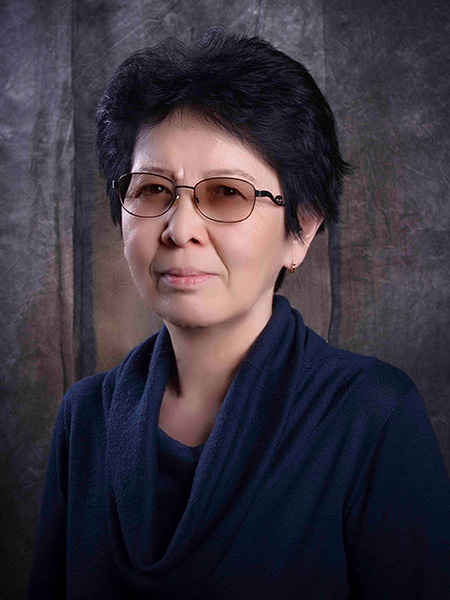