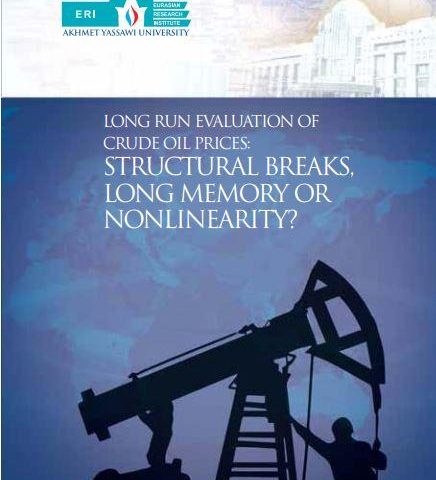 Crude oil is such important energy type that forecasting its prices both in particular and in other types of energy prices in general over time has been widely discussed in the literature. Under the Hotelling modelling tradition, much of the controversy is linked to this choice of a stochastic process to represent the evolution of the exhaustible resource’s price, and asks whether crude oil prices are best modelled in the long-run as a random walk or as mean reverting.With the thought that we could attain some useful inference about crude oil market and its supply and demand structure, the time-series properties of crude oil prices have been examined again in this paper by applying some tests, such as the standard linear parametric tests of stationarity with structural breaks (Zivot and Andrews; Bai and Perron), the standard linear parametric tests of stationarity without structural breaks (Augmented Dickey Fuller; Phillips and Perron; Kwiatkowski, Phillips, Shin and Schmidt; Dickey-Fuller with generalized least squares de-trending (DF-GLS) test; Elliot, Rothenberg, and Stock point optimal; Ng and Perron modified versions of the P-P and Ng and Perron ERS point optimal)  fractional unit root tests (Geweke and Porter-Hudak; Robinson Gaussian Semi-parametric Estimator) and parametric non-linear tests (Caner and Hansen; Kapetanios, Shin and Snell), on a secular annual series of crude oil prices to identify their most useful properties. Because of testing the Hotelling model, it is significant to use an historical data set. I examine the long run behaviour of crude oil covering the 150-year period (1861-2010). According to linear unit root tests with and without structural break, crude oil has generally been found as a random walk process. Also, the endogenous structural breaks are significant but they have not affected the random walk process of these series. And yet, crude oil price series have also been found nonstationary with reference to fractional unit root test result. But integration order has been found smaller than one for crude oil prices. Moreover, I have found that we can reject the null hypothesis of linearity in favour of the alternative, that there is a threshold effect in the price series barring crude oil price case with intercept, indicating that simple linear models are inappropriate.