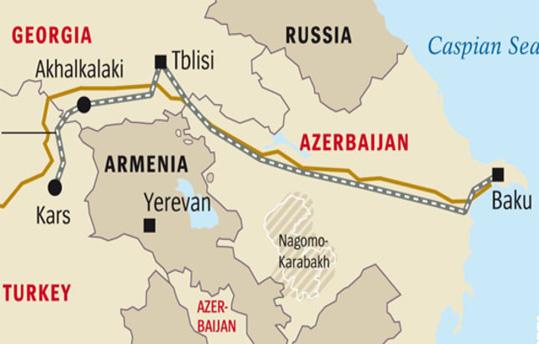 Taking into the fact that the Trans-Eurasian rail cargo is on the rise it is not surprising that regional countries are strongly interested in enhancing their railway network with new routes and new logistics hubs. Increasing competitiveness of the East-West international transport corridors that create an integrated freight railway network between Europe and Asia leads to a situation, in which the countries of the Eurasian region have to expend maximum effort to ensure the full implementation of the initiated transportation projects. The railway project that links Baku in Azerbaijan with Kars in eastern Turkey via Tbilisi in Georgia (Azerbaijan Export and Investments Promotion Foundation, 2007), was not an exception in this regard. Its participants consider the new Baku-Tbilisi-Kars (BTK) railway route as a land bridge between the booming markets of Asia and Europe aiming at reestablishing the ancient Silk Road, through which goods could be transported by rail from one side of Eurasia to another in just 15 days bypassing Russia. (Shepard, 2016)

Designed to become a key part of the southern route of the emerging New Silk Road network the BTK railway route[1], as it shown in Figure 1, envisages reconstruction of 178 km-long section of Akhalkalaki-Marabda-Tbilisi railway and construction of a new railway from Akhalkalaki to Kars including a 29-km section in Georgia and a 76-km section in Turkey. During the construction of a new railway route, the parties faced a number of difficulties including technical and financial constraints. For instance, in the light of the lack of interest from the leading international financial institutions three countries involved in construction of the BTK agreed to finance the project themselves. However, Georgia was unable to cover financial liabilities for its 178-km section forcing Azerbaijan’s State Oil Fund to provide the necessary financing in the form of loans valued at $112 million (1% interest) and $323 million (5% interest). Moreover, the Akhalkalaki-Kars section, which border crossing by tunnel and is being constructed by Turkey had faced delays due to technical and legal problems. It was initially scheduled that construction would be completed in 2014, however, numerous problems with the Turkish construction firms caused additional delays on Turkey’s section of the BTK project, while Azerbaijan’s and Georgia’s segments were already operational.

However, to date it appears that the participants of the BTK project seem to finally overcome all difficulties and regular trains will run on the new route by the end of 2017. In fact, according to the Turkish Foreign Minister, Mevlut Cavusoglu, the BTK railway, the construction of which began in 2008, would be launched in the next two months. As a result, the intensification of the negotiation process has become necessary in connection with the recent developments in the BTK project implementation.

In July 2017, the high-ranking officials of Azerbaijan, Georgia and Turkey conducted a number of meetings aimed to discuss the current state and further prospects of the BTK. On July 19, 2017, the Chairman of the Azerbaijan Railways, Javid Gurbanov, the Economy Minister of Georgia, Georgy Gakhariya, and the Minister of Transport, Maritime and Communication of Turkey, Ahmet Arslan, held consultations in Kars, during which an agreement on establishing a logistics center within the framework of the BTK project was signed. Moreover, after the meeting in Kars a first test train traveled from Turkey to Georgia via the BTK route. (Israfilbayova, 2017) The meeting participants were among the first passengers of the train. Furthermore, on the same day the Chairman of the State Customs Committee of Azerbaijan, Aydin Aliyev, the First Deputy Prime Minister and Finance Minister of Georgia, Dmitry Kumshishvili, and the Customs and Trade Minister of Turkey, Bulent Tufenkci, attended a trilateral meeting held in Baku, during which the parties discussed the streamlining of customs procedures at borders to facilitate trade, as well as the joint fight against illegal trade. (Israfilbayova, 2017) As a result of the meeting, the sides signed a declaration on the establishment of a permanent commission that will improve relations between the customs authorities in the region to speed up customs procedures and reduce time spent at border crossings. Moreover, Azerbaijan and Turkey signed an agreement on the creation of an electronic system for the exchange of information on transit ground transport. This proves beyond any doubt that Baku, Tbilisi and Ankara pay special attention to the BTK project and carry out large-scale work to increase freight traffic creating new mechanisms for the exchange of transit cargo information.

There are great expectations over benefits that the BTK railway should bring to Georgia, Turkey and Azerbaijan. It is expected that the peak annual capacity of the BTK railway will be 17 million tons of cargo and three million passengers. At the initial stage, it will serve one million passengers and transport 6.5 million tons of cargo. It appears that after its completion the project will definitely contribute to strengthening economic ties between the countries along the route. Moreover, the BTK railway is technically a part of the so-called Trans-Caspian International Transport Route (TITR), which is aimed to provide cargo transportation from China through Kazakhstan along a shorter route to Turkey or to Ukraine and on to Europe. Since the TITR partner countries have already started to harmonize their tariffs and provided discounted rates for the transit cargo, it is expected that with the commissioning of the BTK railway line this year Turkey will become the second main transport destination for cargo traveling along the TITR corridor in parallel with Ukraine, which allows achieving transportation of up to 2 million containers per year through the corridor by 2020.

Taking into account the significance of transport projects for the development of regional infrastructure, Ankara demonstrates its willingness to put the construction of the second railway line connecting Azerbaijan and Turkey back on agenda. In fact, Transportation, Maritime Affairs and Communications Minister, Ahmet Arslan, stated the government wants to create a branch of the BTK project that will run through Igdır-Dilucu-Nakhchivan via Kars to Iran, then Pakistan, India, and the south of China. In order to put the railway into operation, it is planned to reconstruct the section from the border with Iran to Nakhchivan’s Sadarak district and to lay ten more kilometers of lines with the Kars-Nakhchivan railway project. (Gadimova, 2014) The 335 km-long Kars-Nakhchivan railway that according to the feasibility study could amount $1.5 billion would definitely complement the BTK project. However, the construction of the railway will begin only following the agreement of the parties as it was the case of the BTK. Therefore, it appears that the Turkish authorities will continue the talks with Iran and Azerbaijan to complete the Kars-Igdır-Dilucu-Nakhchivan-Iran corridor in the same way. (Daily Sabah, 2017) It could be expected that the Azerbaijani side will support the establishment of an intricate network of railway lines bypassing Armenia. However, the coordination of details relating to a new railway route should be agreed with the Iranian authorities in order to enable the further concrete measures to be taken for its further implementation.

In conclusion it should be admitted that the emerging Trans-Caucasus transport corridor via Turkey, Georgia, and Azerbaijan would definitely benefit of the Chinese exports to the European market, however, there is a need to diversify the cargo traffic along the route increasing the amount of goods produced in the new manufacturing centers of the BTK project participants. As a result, despite the fact that the opening of the BTK was announced more than once previously, there is a strong possibility that the parties will finally define the date of the opening ceremony in the nearest future.

[1] The BTK project was proposed in Ankara in 1993 after Turkey closed down the Kars-Gumri railway route via Armenia, due to the Nagorno-Karabakh conflict. It took 14 years for Azerbaijan, Georgia, and Turkey to reach an agreement over the BTK railway construction. In 2007, the leaders of three countries came together in Tbilisi and signed the respective agreement.